Unsurprisingly, controversial crypto thought leader Bitlord has found himself in a new mess of trouble. Interestingly enough, this time involves his employer, DueDEX, regarding a work contract nobody knew existed prior to the falling out.

On April 7, Bitlord (@Crypto_Bitlord on Twitter) shared that his DueDEX account was locked and his affiliate earnings seized. DueDEX. Is a Due-Derivatives-Exchange (whatever the fuck that means) that offers crypto derivative markets and uses a ton of buzzwords in their marketing campaigns.

Days later, the companies CEO Tweeted out that they are terminating Bitlord from DueDEX. This is an interesting development on its own, as there was no prior information citing Bitlord as a member of the DueDEX team.

I regret to announce that despite attempts to settle amicably, we have terminated @Crypto_bitLord ‘s employment with @DueDEX_Official due to breach of contract – misuse of company resources, neglecting works duties, repeated blackmails & threats, and working for competitors.

His role on the platform was to attract users and build exposure, which he did through his Twitter account and while attending conferences and meetups. Getting paid to recruit fresh blood to an exchange without telling anyone you are getting paid is definitely illegal, but it’s crypto so nobody really cares about that.

Alongside the fired-by-Tweet, Bo also released a statement on Twitter outlining the context of the situation and information pertaining to Bitlord’s signing and employment history. In doing so, DueDEX publicized some of Bitlord’s personal information, primarily his name and location. This led to backlash across the space. Doxxing is a big no-no, especially when you’re an exchange that promises no-KYC and identity protection. Yikes.

Read through the replies to the Tweet to get an idea of the sentiment at hand. Bitlord, who has a knack for getting himself into trouble, Tweeted later in the day that the doxxed information led to individuals reaching out and harassing his wife and other family members. Not cool, Dudesex.

DueDEX asserted that Bitlord breached terms of his contract by shilling competitor exchanges like Bitmex and Huobi Futures. In regards to the frozen account, they argue that terms of his signing included him to stop using that account, which he didn’t. In another impressive lack of oversight, the exchange cites an account that is clearly impersonating Bitlord (check the handle) as proof of him shilling other exchanges: 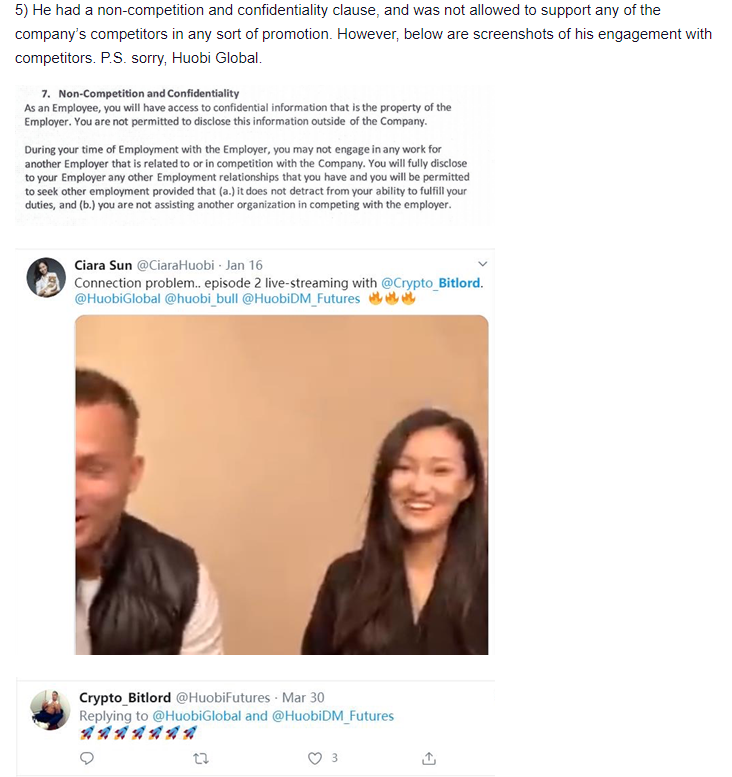 Bitlord fired back, asserting that he isn’t employee- he’s a cofounder, damnit. Bitlord argues that he has equity in the company and they aren’t allowed to terminate him.

A number of other influencers and crypto “OGs” flocked to Bitlord’s defense.

The 2 things you need to feel safe with an exchange:

In an exclusive interview with Bitcoinisthedevil.com, Viacoin creator and famed ass eater Romano, shared the following comments in regards to the controversy, “KEK”.

In the realm of crypto, Bitlord has historically held a reputation as a fellow looking for trouble. He rocked headlines last Summer as the flagship supporter behind a proposed Ripple fork. Recently, Bitlord was detained by Chinese officials when trying to leave the country. Bitlord traveled to Wuhan at the start of the year to cover the spread of the Coronavirus.

On April 9, Bitlord stated that he’d have a full update pertaining to everything that happened by the next day. As of today, April 11th, he has shared no updates.

Enjoying the Bitcoin is the Devil, the Reallyest Realest News in Crypto? Stay up-to-date and join the discussion on Telegram (telegram also includes my free trading signals that you can counter trade for great profit). If you’re reading this far you should also know that very soon NEET, the tokenized depression standard, will go live and be airdropped to depression junkies across the space. Telegram subscribers get first dibs and the largest airdrop, so you’ll want to stick around for that. Catch every shorthand meme on Twitter