Commodities Hilarity: Oil Trading at -$40 per Barrel: Here’s Why

Coiners and no-coiners have oft argued about the underlying intrinsic value of Bitcoin and other cryptocurrencies. The most adament skeptics suggest the true value is $0. However, nobody has speculated a negative value of crypto assets. Today, we’ll focus our attention to traditional commodities. Oil futures traded for a record -$40 per barrel earlier today.

The Western Texas Intermediate crude oil May futures closed the day trading at -$37.63 per barrel, a day-to-day loss of over $50 on an option entering the day at just under $20 per barrel. If that sounds ludicrous, you’re right- it is. But that’s the reality of the situation. Check it out: 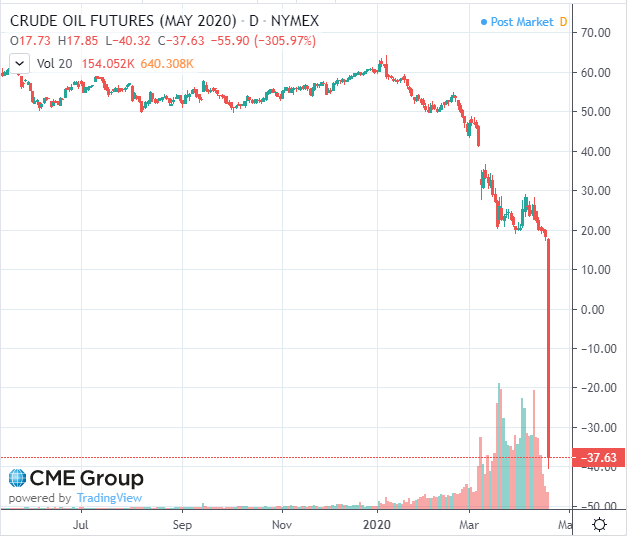 What Exactly is Going On?

Tomorrow, the May WTI futures will settle. This is a physical contract, meaning that tomorrow, everyone holding positions will be awarded their per-barrel equivalent in gallons of oil. At this point in time, there is far more oil being produced than there is being consumed, and the United States doesn’t boast proper infrastructure to take on excess crude oil production. Refineries aren’t purchasing as the demand for gasoline has plummeted. Unlike Bitcoin mining operations, shutting down a drilling operation isn’t as easy as flipping the switch when the rig is no longer operational. Unlike gold, oil takes up a lot of space and requires proper handling conditions so that it doesn’t catch fire or leak into the environment.

This plays out as the recipe for a perfect disaster. Oil traders found themselves at the losing end of a nationwide game of hot potato. Much worse than a collapsing ponzi, those who were unable to get out before today’s day of reckoning found themselves holding oil they had no means to take on. Traders who went long as recently as week lost more than three-times their initial trade value.

You may very well see the price of negative thirty-seven-dollars-and-sixty-three cents as a favorable entry point. A rough estimate suggests that a standard, 42-gallon barrel of crude oil translates to about 20 gallons of gas. Even at a low price of $2 per gallon of petrol, you’re potentially getting paid $37 dollars a barrel for a resource that can be sold for $40. However, it’s not so simple, and this is what unlucky oil speculators may find themselves facing next month:

In order to collect your glorious crude oil, you need to have a position of at least 1,000 barrels, and capacity to store them puppies. Western Texas largely ships their oil via pipeline. This means you need some spare tanker trucks or ships on-hand, or you need to acquire some in time for the delivery date next month. For reference, an average tanker truck can hold 190 barrels of crude oil. Unfortunately, you can’t sign on to store 50 barrels in your backyard or pump your pool with a smooth 250.

For those that jumped the gun and collected their free oil checks, or traders that are unlucky enough to hold to expiration, their oil will be transported to some nearby storage facility (probably in Oklahoma), where they’ll pay a third-party to store their oil until they find someone to buy it. Irrefutable experts of Quora suggest that oil storage operations only charge roughly $0.60-0.70 per barrel per month- though that’s under normal circumstances. Still, there may be further speculative play, taking the oil now and paying storage until you can sell it off (hopefully several months down the road).

Shockingly, there is some opportunity to make some money buying oil at -$37 per barrel. You can be the proud owner of one of roughly 7,500 oil tanker ships worldwide for only US$43 million.

That $43 million puppy enables you to store 2 million barrels of the good stuff. In other words, you can get a paycheck of $74 million right off the bat, and it will only cost you $43 million (plus taxes and slippage and storage fees). When you find a buyer, you sell those barrels at whatever price you want- it’s all profit. Resell the tanker when you’re done with it, as they hold their value much better than your run-of-the-mill yacht. Forget shitcoins, who is gonna step up and run an ICO to buy an oil tanker?

Enjoying the Bitcoin is the Devil, your Correspondence to the Depression-Attention Economy? Stay up-to-date and join the discussion on Telegram (telegram also includes my free trading signals that you can counter trade for great profit). If you’re reading this far you should also know that very soon NEET, the tokenized depression standard, will go live and be airdropped to depression junkies across the space. Telegram subscribers get first dibs and the largest airdrop, so you’ll want to stick around for that. Catch every shorthand meme on Twitter