In many ways, it’s difficult to pin down exactly who was the “biggest loser” in what amounted as the greatest wealth transfer from disillusioned tech nerds to snake oil salesmen of all-time. But that’s only true if you ignore the immaculate failure that is DeepBrain Chain. DBC investors were definitely the biggest losers.

A major theme across 2017 ICO burnouts is wistful investors asking for more transparency. The good news for DeepBrain Chain followers is that the team is impressively transparent. The bad news is they are transparent about their status as a straight scam. DBC holders woke up to a brief message on the DBC official Medium page today. Quoting it wouldn’t do justice, here’s a screenshot: 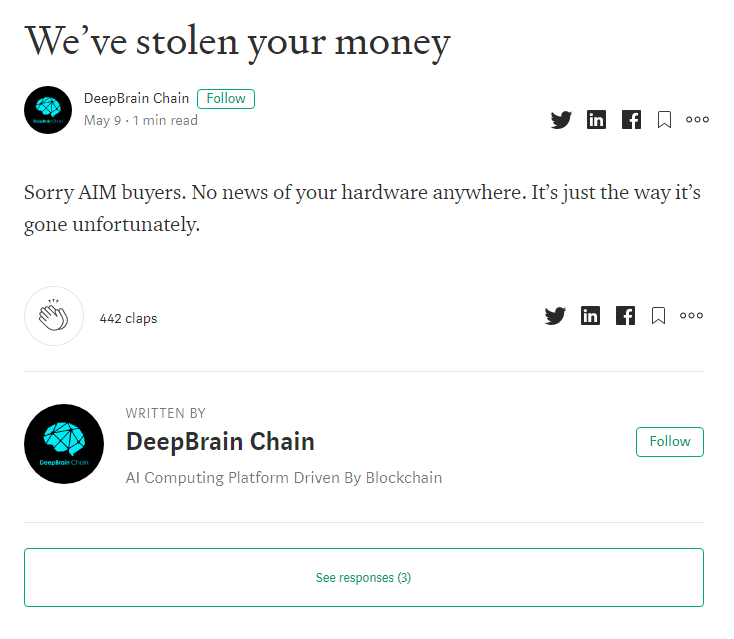 Shortly after DBC raisedover US$11 million in a matter of hours, the coin did a smooth 50x, eclipsing a price of $0.60 per coin. Today, DBC bounces between 6-7 satoshis, thanks to abandoned market making bots that have been left to build orderbooks until the end of time. At 10k per Bitcoin, that’s a per-coin price of $0.0006. Folks who bravely HODL’d down all the way from the top are currently facing unprecedented losses of 99.9%. A thousand bucks at the top can’t even buy a Big Mac after taxes.

They’ll need roughly 1000x to get back to breakeven. To put things in perspective, someone who bought Ethereum when trading first went live and sold it at the all-time high would have made about 1000x in returns. To put things in perspective, someone who hoarded gold when the USD was first invented in 1792 and sold at all-time high in 2011 and then immediately reinvested that profit into Amazon stock and sold that at all-time high at the end of April would net a roughly 1000x gain in USD. In other words, DBC hodlers are rekt beyond repair.

This isn’t the first time that chad DBC administration cucked their virgin hodlers. Earlier this year, DeepBrain CEO Feng He shared in an AMA that DBC is in debt and they are dumping all unlocked tokens to pay for any operating costs and living expenditures they can muster.

Another interesting component is that a large portion of the token supply that is unlocking is supposed to be allocated towards mining rewards. The “AIM” buyers referenced in the above article are individuals that bought into a special DeepBrain mining rig pre-sale. For $6,000 in DBC investors would get a specialized mining rig that would yield DBC earnings and secure the (non-existent) DeepBrain mainnet.

However, all indications point to the truth that the past two years has amounted to virtually no progress towards the creation of these miners. Even if DeepBrain decides to reimburse, that $6,000 in DBC now would only be worth a small lunch order without a drink.

At this point in time, it seems that the future for DeepBrain lies in the executives keeping enough of the pulse on the project to dump unlocked tokens in order to pay rent.

Impressively, DeepBrain is down another 90% from the last time we reported on the gem.

Enjoying the Bitcoin is the Devil, your Correspondence to the Depression-Attention Economy? Stay up-to-date and join the discussion on Telegram (telegram also includes my free trading signals that you can counter trade for great profit). If you’re reading this far you should also know that very soon NEET, the tokenized depression standard, will go live and be airdropped to depression junkies across the space. Telegram subscribers get first dibs and the largest airdrop, so you’ll want to stick around for that. Catch every shorthand meme on Twitter